The Swiss-Serbian Chamber of Commerce (SSCC) welcomes Mr. Ansgar Bornemann, Market Head of Nestlé Adriatic, as SSCC’s President! During the Board meeting which took place on November 17, 2014, Board members elected Mr. Bornemann for the President, and Mr. Marinko Ukropina, managing director SGS for Adriatic region, for the Vice-President of the Swiss-Serbian Chamber of Commerce.

These elections present the final act of the establishment process of the Swiss-Serbian Chamber of Commerce, which was officially created in March, 2014. According to Mr. Bornemann, the Association “strives to create sustainable and long-term Swiss-Serbian business relations, in two directions: achieving a more convenient business climate for Swiss companies here and, parallel, enabling and helping domestic companies to operate better and develop their activities in the Swiss market“. SSCC, which today counts more than 30 members, is now opening the call for new membership applications and welcoming new members in order to provide more added-value services to all members.

According to Mr. Ukropina “to achieve the defined goals, we have to promote basic Swiss values: strict compliance with laws, legislation and global standards, also transparency and quality, and above all these, integrity and ethical behaviour“. 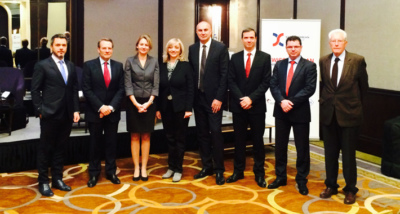