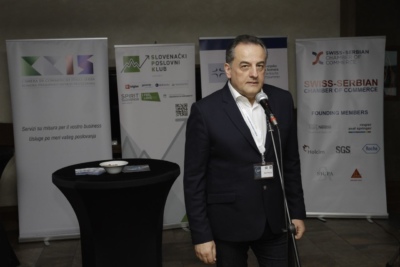 Mr. Majo Micovic, President of the Swiss-Serbian Chamber of Commerce and General Manager of the company ‘Sky Express d.o.o’., said that most of the survey respondents evaluated the current business climate in Serbia as satisfying. However, there has been a slight deterioration in companies’ perceptions of the local business environment: the number of companies that had a positive view of the business environment in Serbia decreased over a period of just one year: 90 % in 2018 compared with 79 % in 2019.

Also, the results showed that majority of surveyed companies expect to see changes in the following business environment areas: public institutions’ efficiency and administrative procedures, fight against corruption, as well as ensuring legal security and stability.

Finally, Mr. Micovic stressed out that the majority of survey respondents expressed satisfaction with SSCC’s work regarding its plan of activities, communication and transparency.